Part one of a two-part series

While I hesitate to call pornography researcher Judith Reisman a hypocrite for going into silence about the Jewish role in the sexual terrorism industry, also known as pornography, her work has laid a framework for combating the psycho-sexual terrorists that are attacking humanity.

The film takes the classic Jewish tactic of “Nazi-linking.” That is, to link an already vilified subject to Nazism, in an attempt to further denigrate the person as if being a pedophile weren’t enough. The Kinsey Syndrome film goes further, using the term “Judeo-Christian,” as if the two religions had anything in common as far as doctrine, much less sexual morality. 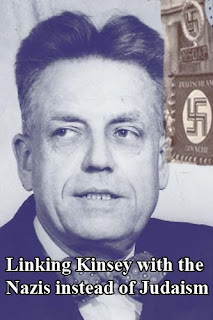 All of this wouldn’t seem out of place to the average untrained mind; however, if one knew the true teachings of the Jewish religion, largely contained in the Babylonian Talmud, they would see the utter hypocrisy.

The Talmud, the "holy" book of supreme authority in the Jewish religion, according to Encyclopedia Judaica, condones pedophilia among Jewish priests. For a Jewish priest to marry a little girl of three years of age or less is "like nothing," according to the Talmud, as the virginity (hymen) of such a little girl will grow back. The Talmud is full if sadistic and very bizarre sexual laws in addition to its allowance of pedophilia amongst Jews.

Another bizarre sexual practice in Judaism, metzitzah b'peh which is carried out during circumcision, involves a Jewish rabbi sucking the penis of baby boys.

In a radio interview BlogTalkRadio in Sept., Reisman even talks of pedophilic tendencies in Islam. Reisman is Jewish, of course. While the pro-pedophile teachings in some Islamic groups may be argued, the mentioning by Reisman only further distances the learner from the dominant Jewish roots of the modern pedophile-pornography lobby.

How can Reisman claim to be exposing sexual terrorism while not identifying the main players?

Prominent Jewish pornographer Al Goldstein made the alarming revelation in an interview with Luke Ford:

“The only reason that Jews are in pornography is that we think that Christ sucks. Catholicism sucks. We don’t believe in authoritarianism. Pornography thus becomes a way of defiling Christian culture and, as it penetrates to the very heart of the American mainstream (and is no doubt consumed by those very same WASPs), its subversive character becomes more charged..."

Jewish professor of American history at Aberdeen University in the United Kingdom Nathan Abrams claims that Jews are the driving force behind the modern pornographic industry and that their motivation is in part to destroy Gentile morals.

Reisman's research on pornography as an eroto-toxin,and its a negative effect on humans is difficult to dispute. Her endorsement by the U.S. Justice Department is impressive and her research on the Rockefeller Foundation and its role in the sexual revolution is accurate, but Reisman, like many others claiming to be patriots and 100 per cent for the people, is really telling half truths and leads a person down a road that ends up leaving the person lost in a mind plagued by the Holocaust-guilt complex.

Unlike legitimate Jewish defectors like Benjamin Freedman and Mordechai Vanunu, Reisman appears to be a Jew who pretends to fight for humanity--or at least believes so in her own mind--but simply leads people into the state of mind of Jewish victimhood.

Watching The Kinsey Syndrome, one is left with the impression that Nazis and church clergymen are the driving force behind sexual immorality and Jews are innocent and are the crying voices of the victims of such sexual immorality.

Posted by Timothy Fitzpatrick at 8:37 PM