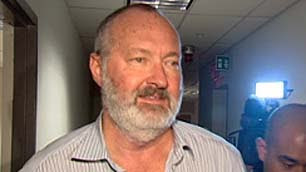 After seeking refugee status in Canada this week, Randy Quaid still holds to his story that there is a conspiracy to kill him and other Hollywood stars in order to take their money.

Thus the reason for Quaid and his wife Evi fleeing to Vancouver, Canada.

What Quaid may not be aware of is that Zionist Hollywood has a reputation of chewing up and spitting out gentile stars and using them as total mind-controlled slaves, most notably, Marilyn Monroe and Britney Spears. The Illuminati use sex slaves to implement their counter-humanity agenda. (See: http://theconspiracyzone.podcastpeople.com/posts/33073) Remember Britney Spears shaving her head as a symbolic expression of shedding her Satanic/Illuminati controllers?

Quaid says for the last 20 years he and his wife have been the victims of criminal activities by people who are out to destroy them personally, professionally, and financially.

He became emotional as he told Canadian reporters that in the last five years eight actors he's known have died at the hands of so-called "star wackers."

Quaid says other stars including Britney Spears, Lindsay Lohan and Mel Gibson are also being targeted for their money. Furthermore, he says about $40 million of his earnings have been embezzled by a group who is not only trying to kill his career, but murder him to gain control of his royalties.

During their immigration hearing Friday, Evi Quaid pointed out that eight of their close actor friends had been murdered and they felt they could be next. She cited the deaths of Heath Ledger and David Carradine as examples.

The Zionist Illuminati's use for women Hollywood stars makes sense, but why target Quaid? Mel Gibson became a serious target of Jewish Hollywood, particularly after producing the film The Passion of the Christ. With The Passion, as well as Gibson's outspokenness on his views on Jews, not to mention his father Hutton Gibson and his alternative views on the alleged Jewish Holocaust, it would make anyone a target of the powerful American Jewish lobby and its Hollywood brainchild.

So, is Quaid a secret anti-Zionist or are the Zionists looking to loot the wealthy star and take over his royalties as Quaid claims.

We hope that Quaid, like Mel Gibson, will wake up to the reality of the International Jewish-Masonic conspiracy that owns and controls Hollywood.

Posted by Timothy Fitzpatrick at 9:17 PM