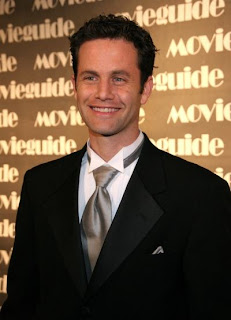 The seemingly contradictory mind of Kirk Cameron is a wonder indeed, but Cameron is one of thousands of double-minded evangelical Christians who believe in heretical doctrines such as the pre-tribulation rapture (Dispensationalism) and Dual Covenant Theology (Jews are chosen forever with their own covenant for salvation).

While Cameron's recent work with his ministry, The Way of the Master, does offer tracts to evangelize Jews, it doesn't go quite far enough, especially considering that Cameron was in the thick of Zionist Hollywood--even calling the producers of his hit TV show, Growing Pains, pornographers.

But perhaps there is nothing to make of this when you look at some of his religious films that go one step further. The Left Behind movies, two of which Cameron starred in, foments the old pre-tribulation rapture heresy that only benefits today's apostate Jews and their horrific state of Israel.

When one looks at the actual origins of dispensationalism and the pre-trib rapture doctrine, one finds a long list of Jewish and Freemason interests.

Cyrus I. Scofield can easily be called the father of this Christian heresy, but I doubt very much that Cameron has come across any critical look at this mysterious Mason who created not only a doctrine, but a bastardized, war-hungry cult with a Christian mask on.

Freemasonry, Zionism, Scofield and his reference Bible are anything but Christian. Does Cameron not see this? Does he not know that the author of the Left Behind series, Tim Layhae, is a Freemason? Has Cameron given a critical look into the pre-tribulation dispensational teachings, as the Bible commands all to seek and search out the truth? Or has Hollywood twisted his perceptions, well below the radar of his Christian discernment?

There is also the possibility that Cameron is afraid to speak out against the anti-Christian Zionist power which provided him a living and made him wealthy. Perhaps he would suffer the same treatment that anti-Zionist Catholic actor Mel Gibson has suffered since he produced the powerful Passion of Christ movie. Since then, Gibson has been the Zionist target. Now look at Gibson today. But, Cameron is cleaner and has less skeletons than Gibson. Cameron would be far more successful in exposing anti-Christ Zionism.

As Mike Seaver, the character Cameron portrayed on the seemingly wholesome 80s sitcom, matured and grew (on the show and off) he began to seek God and developed a sense of discernment. This discernment led him to see the sinister truth behind Hollywood producers (most of whom are Liberal Jews). As the producers pushed for a more racy show (keeping in line with the deterioration of society) Cameron began to despise them and the new direction they were taking Growing Pains.

Cameron reportedly went as far as calling his Zionist producers, "pornographers."
And rightly so. Hollywood's true blue cousin, the pornography industry, is almost a completely owned and operated Jewish institution.

"Jews totally run Hollywood," said Jewish columnist Ben Stein in the LA Times in 2008.
But Cameron already knows this. He once told Fox News host Bill O'Reilly that a Hollywood acquaintance told him,"Boy, you sure picked the wrong religion for this town!” Cameron had become a Christian amongst a tide of anti-Christian Liberal Jews in Hollywood.

"The only reason that Jews are in pornography is that we think that Christ sucks. Catholicism sucks. We don’t believe in authoritarianism.” Pornography thus becomes a way of defiling Christian culture and, as it penetrates to the very heart of the American mainstream (and is no doubt consumed by those very same WASPs), its subversive character becomes more charged," Al Goldstein, the publisher of Screw magazine, said in an interview with Luke Ford.

Could the same be said of Jewish involvement in Hollywood in general?

Cameron's Christian evangelism is commendable and according to the teachings of Christ in the Bible, but even Jesus Himself did not shy away from Jewish power in His time.

"Ye are of [your] father the devil, and the lusts of your father ye will do. He was a murderer
from the beginning, and abode not in the truth, because there is no truth in him. When he speaketh a lie, he speaketh of his own: for he is a liar, and the father of it." --Jesus to the Pharisees, John 8:44.

"Woe unto you scribes and Pharisees, hypocrites! for ye are like unto whited sepulchres, which indeed appear beautiful outward, but are within full of dead men's bones, and of all uncleanness. Yours is the House of desolation, the home of the lizard and the spider," said Jesus.

Cameron, if Jesus can do it, why can't you?