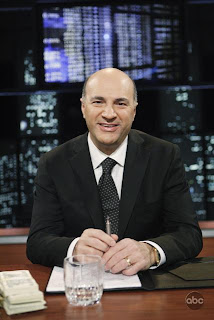 If crypto-Judaism was a mechanism used to survive the Jewish pogroms of Europe, one would naturally ask what it's use would be today.

A CBC fiancial analyst and venture capitalist named Kevin O'Leary comes to mind when thinking of a modern day crypto-Jew--that is a Jewish person posing as a non-Jewish person for reasons known or unknown.

O'Leary is a particularly bold crypto-Jew who appears on television on a regular basis, either as a CBC financial guru on BNN and the Lang and O'Leary Exchange, or as his tough, arrogant role on the hit show The Dragon's Den, where "O'Leary" and his counterparts get to publicly humiliate mainly non-Jewish entrepreneurs.

One after another, these entrepreneurs try to pitch to the high and mighty Dragons their latest inventions. The Dragons make the final call and either turn them down, or offer them a large sum of money as a start up.

Jews are well known to gravitate to finance and white collar jobs, so why would Mr. "O'Leary" want to disguise his Jewish ethnicity and take on that of an Irishman--a supposed capitalistic Irishman? Doesn't make a whole lot of sense.

Author and researcher Fritz Springmeier says in his book Be Wise As Serpents, "80% of the applications for name changes in the United States are Jewish."

"Where 50,000 applications are made roughly, that means on a yearly basis 160,000 Jews change their names legally (this is not referring to marriages), and almost all of the name changes are to non-Jewish sounding names," continued Springmeier.

According to Jewish sources, half of the Jews no longer have names that are recognizably Jewish. Perhaps we can assume that the statistics, being so heavily Jewish, are the same in Canada.
It is a well established fact that modern crypto-Judaism is used by Jews to infiltrate religious, political, and financial institutions without being suspected. It was significant enough to have provoked the Spanish Inquisition.

The Jews mastered this deceptive art in Spain as they posed as Catholics and Christians as a way of infiltrating the Church and eventually the political arena. Once crypto-Judaism had penetrated the heart of the Christian aristocracy in Europe, the Jews then initiated their revolutions of terror, with the help of their co-conspirating Freemasonic "brothers."

Today, Jews dominate the leadership of three sectors, whether it be through international banking, control over governmental institutions like the U.S. Congress (AIPAC, the Israel Lobby), or through groups like the ecumenical Worldwide Council of Churches, which promotes a watering down of religions, an aim that clearly benefits the State of Israel and the so called world domination plan outlined in the controversial Protocols of the Learned Elders of Zion.

Jews, however, know that if their involvement in such high places were ever discovered by the majority of the world, and if there devious agenda, contained in their "holy" books the Babylonian Talmud and Kabbalah, were ever brought to the light of day, there would be mass revolts overnight and they would quickly lose the control they had spent years attaining.

Perhaps then, Mr. "O'Leary's" crypto-Judaism is a defense mechanism based on one possible future scenario.

"He (O'Leary) has for example, spoken of temporarily abolishing corporate tax in North America as a means to fix the 2008 recession, showed skepticism towards the automatic economic benefit of "environmental friendly" products, and is frequently critical of government intervention in the economy, such as the multi-billion dollar auto company bailouts." --Wikipedia

This is in line with the Zionist arm of Judaism, which is largely right wing and capitalistic. The other arm, Marxist-Socialist Judaism (Bolshevism), is obviously of the left; however, both wings of Judaism are in agreement on the State of Israel and the domination of the gentile world, using one side against the other in a continuously carried out Hegelian conflict.

If "O'Leary" thinks he can fool all of the people all of the time, he is dead wrong. He has been detected, and he can no longer claim protection under the crypto-Jewish deception.
Posted by Timothy Fitzpatrick at 5:28 PM