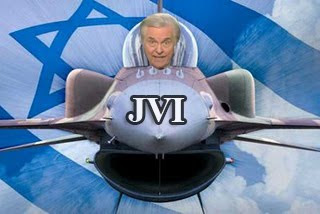 As tele-evangelist Jack Van Impe blasts off quote after quote from the Bible, an amazed audience looks on and thinks this sincere, concerned-looking face must be a messenger of God.

This impressive display has provoked the masses within North American Christendom to tune in every week, donate time and money, and purchase DVDs every month on the latest disinformation on the New World Order, Bible prophecy, and, of course, the ubiquitous talk of the state of Israel.

For viewers who might be a little turned off by the seemingly knowledge-based ramblings and often fear-based predictions on world events of Mr. Van Impe, there is his dolled up sidekick wife Rexella Van Impe to sweeten and soften things up for easier consumption.

The Jack Van Impe Ministry (JVI) has been on the airwaves for an impressive amount of years. Unlike many other pushy televangelists, Van Impe has a sincere demeanor and approach to his televised presentation.

Lately, Van Impe has been talking a lot about the New World Order, World Government, and the well known associated groups: the Trilateral Commission, the Council on Foreign Relations, and Bilderberg. In the following footage, Van Impe discussed the NWO and the anti-Christ of the week; in this case, U.S. President Barack Obama. (Jack has predicted many others as possibly being the anti-Christ, even though the Bible never once mentions an "anti-Christ" person.)

As you can see, and from many other telecasts where Jack "exposes" the New World Order, his infantile explanations are hardly worth the cheap furniture on his TV set. Even presidents, heads of State, and Ted Turner are allowed to talk freely of the New World Order. As if just mentioning it means anything anymore. Nonetheless, Jack Van Impe's followers believe he is revealing a big smoking gun and they cling to him even more as some authority on truth.

superficial grasp of things. But what makes this scenario difficult to believe is Van Impe's obsession with talking about long-dead Nazis and Al Qaida coming to get us while the rest of the world is apparently trying to eradicate innocent Israel (God's chosen people, according to Van Impe) from the face of the earth.

Now we have Van Impe pandering to the Israel lobby in addition to his infantile NWO "exposing" that can only help cover up the reality of the NWO and its key players. (Remind you of Alex Jones? Interestingly, both Jack Van Impe and Alex Jones promoted fear and hysteria leading up to Y2K)

Jack's Biblical heresy is quite simple: He is a proponent of the 70-Week gap theory, supposedly found in the Book of Daniel, transforms a prophecy about Jesus (Daniel 9:27) into a prophecy about some "anti-Christ" figure that supposedly creates a peace treaty between Israel and the Palestinians, and then claims Russia will attack Israel. Van Impe then believes the rapture whisks away all the Christians. Case closed. This Scofield heresy is dangerous and political in nature; not Biblical.

If Cyrus I. Scofield was a Zionist agent working for the Illuminati conspiracy to subvert Orthodox Christianity, does that make every televangelist who parrots this heresy equally culpable?

The Illuminati wish to hijack Bible prophecy, replace it with their own twisted version of it that puts them on the winning side.

Is Jack Van Impe a Zionist agent, part of the Israeli-sponsored counter-intelligence program that is currently subverting the Church and the whole world? He certainly wouldn't be the first. A long line of cointelpro "pastors" have already laid the groundwork for this mass deception: Hal Lindsey, Chuck Missler, Grant Jeffrey, and Pat Robertson, to name a few. See: Alex Jones promotes Zionist heretics Jeffrey and Missler http://fitzinformer.blogspot.com/2010/08/alex-jones-promotes-zionist-heretics.html
Posted by Timothy Fitzpatrick at 10:19 PM