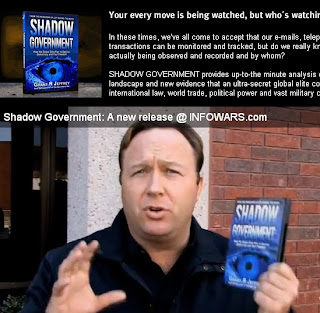 Evidence continues to mount against American radio show host and self-proclaimed patriot Alex Jones that he is a counter-intelligence operative working for the state of Israel.

The latest comes from his promotion of Grant R. Jeffrey and his recently made documentary Shadow Government, which has been spammed all over Alex Jones' various websites and forums for the last 8 months.

Jeffrey, a prominent Christian Zionist author, takes the unorthodox futurist view of Bible prophecy that places Jews on a pedestal and as the centre of attention during the alleged future "Last Days."

While similar Christian Zionist authors and TV evangelists have typically shied away from speaking against the 300 plus-year-old Illuminist forces (comprised mainly by Judaics and Freemasons) their Zionist handlers have instructed them to jump on to the "Truth Movement" band wagon as a means to employ their anti-Christian and pro-Jewish propaganda.

Jeffrey's Shadow Government gives a very generic perspective of the "New World Order" and is hardly different from anything the mainstream "Truthers" have been putting out over the last 12 years. The movie has the appearance and feel of several of Alex Jones' films. From the flashy DVD cover to the used car salesman promotion of the video, it appears that Jones' Zionist handlers are using his video producing skills to aid and abet the Christian Zionist branch of the Judeo-Masonic plot. 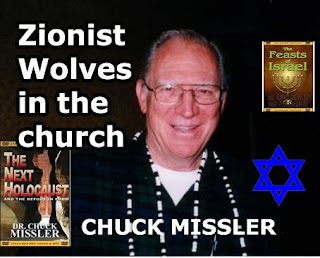 Chuck Missler, another popular Christian Zionist author and lecturer, is interviewed as some kind of expert in Shadow Government and of course, confirms the Kosher conspiracy view of world events. Missler's credentials may be strong in the academic field but his socio-political affiliations are highly worrisome.

Missler is a member of the Council for National Policy, which is basically Bilderberg lite, and tours the world with ardent ultra-right wing Zionist Jews like "Avi Lipkin." The CNP falls under the umbrella of the Zionist-Illuminati network, which is funny because Missler claims to be exposing and fighting the New World Order.

Missler often blends into his sermons bizarre and extreme views on science and physics, likely as a means to impress and captivate his audience, in preparation for a propaganda blitz. The rest of his sermons are filled with Masonically-inspired prophetical views on the Book of Daniel and the Book of Revelation.

So here we have Alex Jones promoting the snot out of Shadow Government, despite the fact that only a few months ago, old footage began surfacing on Youtube showing a young Alex Jones saying:

Whew! After years of speculation and what was the most suspected fault in Alex Jones by skeptics not impressed with his charismatic ramblings, the truth finally comes out, but from the past. Isn't that always what ends up happening?

So it really comes as no surprise that Jones is endorsing pro-New World Order snake-oil salesmen, like Grant R. Jeffrey and Chuck Missler. In addition to Jeffrey, Alex Jones has at least 19 Jewish advertisers who regularly promote their products and services on the various Alex Jones websites.

While it has been confirmed that Alex Jones' wife, Violet, is Jewish, it is unknown if Alex has converted to Judaism, if he is a Christian Zionist himself, or if he is aiding Zionist propaganda for monetary gain and/or protection from the Jewish-led New World Order.
Posted by Timothy Fitzpatrick at 9:17 PM